A police officer has been taken to hospital over fears they may have been exposed to nerve agent that left a couple in a critical condition.

A spokesperson for Swindon’s Great Western Hospital said the unnamed officer had attended for “medical advice in connection with the ongoing incident in Amesbury”.

“There is nothing to suggest there is any wider risk to anyone at the hospital,” she added.

“We would like to reiterate the advice from Public Health England that the risk to the wider public remains low.”

Wiltshire Police confirmed the officer was from the local force and described the tests as a “precautionary measure”.

The local force was the first to respond to the incident in Amesbury on 30 June, when the emergency services initially believed Dawn Sturgess and Charlie Rowley had taken a contaminated batch of drugs.

Chief Constable Keir Pritchard defended the initial response as “entirely proportionate” on Thursday, saying he had personally spoken to the officers and commanders involved to voice his support.

But medics at Salisbury District Hospital became concerned over their symptoms and had samples sent to Porton Down on Monday, which returned results indicating they may have been exposed to nerve agent and triggering a major incident the following evening. 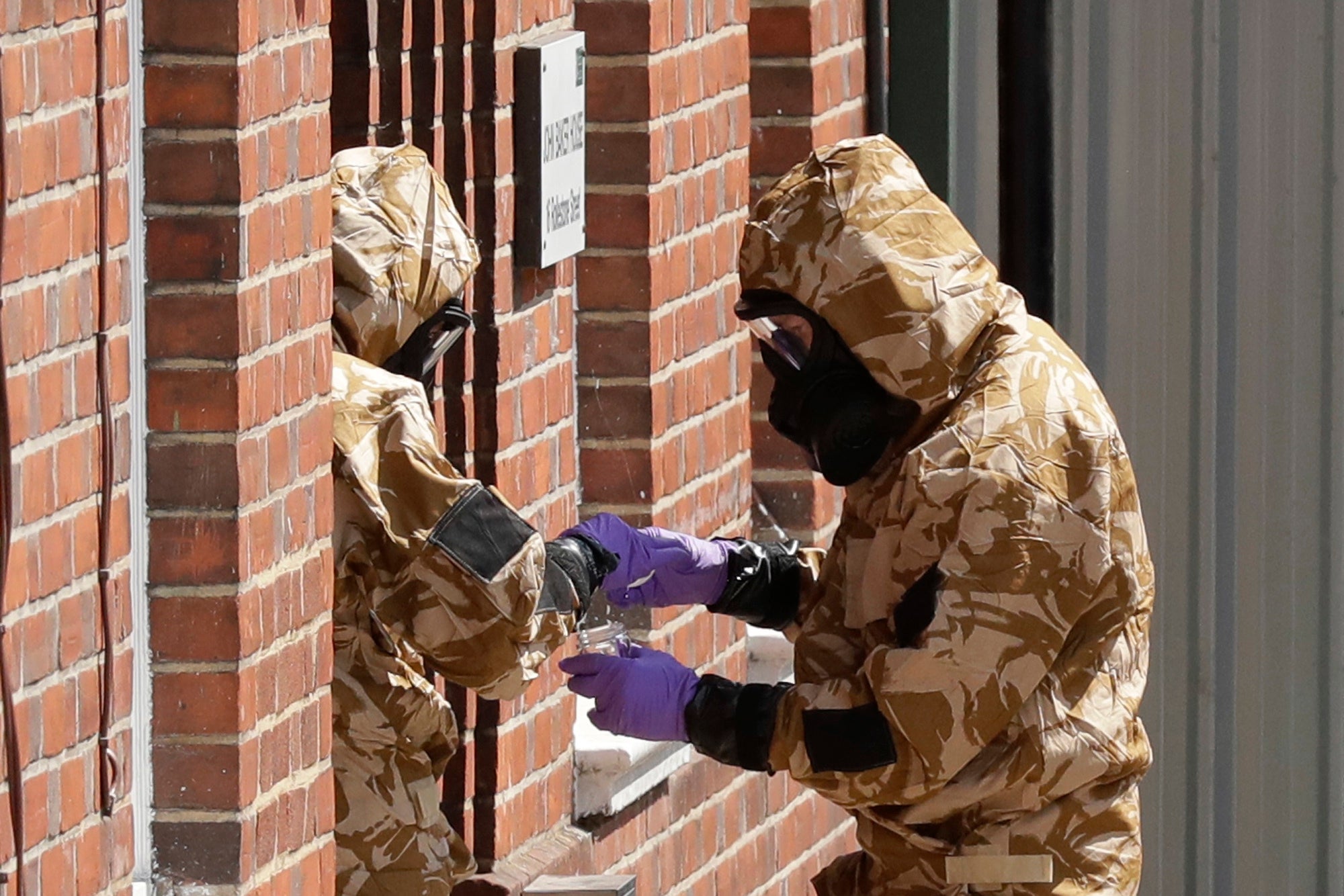 The defence laboratory subsequently confirmed the substance was novichok, sparking renewed public concern over the continued presence of the deadly poison in Salisbury.

Ms Sturgess and Mr Rowley remain in a critical condition at Salisbury District Hospital as police wearing protective clothing search for a “contaminated item” they handled before falling ill.

The “working assumption” by security services is that the item was linked to the attempted assassination of former Russian double agent Sergei Skripal and his daughter Yulia in March.

A Wiltshire Police officer who was among the first to respond to that incident, Detective Sergeant Nick Bailey, also fell seriously ill but has since been discharged from hospital alongside the Skripals.

No suspect has been identified for the attack and investigators hope that tracing the movements of Ms Sturgess and Mr Rowley could provide vital clues on the original culprit.

Officials say the couple, who are both in their 40s and have children by previous partners, had not visited areas of Salisbury that had been frequented by the Skripals and subsequently decontaminated.

Investigators wearing protective clothing entered John Baker House, the assisted accommodation where Ms Sturgess lives, after they took a sample from the outside of the building on Friday.

Other sites visited by the couple in the lead-up to their hospitalisation are also being looked at, including a nearby park and Mr Rowley’s home in Amesbury, a church and Boots branch.

Officers have spoken to several key witnesses, among them a friend of the couple who called an ambulance for Mr Rowley after he started acting “like a zombie” and passed out.

Investigators are trawling through more than 1,300 hours of CCTV footage collected so far in efforts to locate the source of the contamination.

Novichok can be spread by contact between people or with a contaminated item.

One theory understood to be under investigation is whether the pair inadvertently found the container used to transport the nerve agent in the Skripal attack.

Friends of Mr Rowley said he was known to forage for goods to fix and sell, and he and Ms Sturgess are known to have collected discarded cigarettes.

Public Health England has repeated “highly precautionary advice” for people who had visited five locations identified by police, but insisted there is no immediate health risk.

Officials have advised people who visited the same locations as the couple to wash their clothes, wipe down personal belongings and not to pick up discarded items.

The British government has accused Russia of using the UK as a “dumping ground for poison”, after holding it responsible for the attack on the Skripals.

The Russian Embassy hit back, accusing the government of trying to “muddy the waters” and “frighten its own citizens” as the Kremlin denied any involvement.

The couple’s apparently random exposure has deeply shaken a city that was still recovering from events in March.

Police urged people “not to be alarmed” by the reappearance of squads of police officers wearing protective equipment and go about their lives as normal.

England into World Cup semi-finals after win over Sweden