In its autumn 2017 round of forecasts, the commission is now projecting growth for Britain of 1.5 per cent this year, down from 1.8 per cent previously.

The latest 2018 forecast is for 1.3 per cent growth, falling to 1.1 per cent in 2019, the year Britain is scheduled to leave the European Union.

This slowdown is based on assumptions of weak business investment, disappointing export growth and a moderation in UK household spending.

Meanwhile, the commission has raised its GDP forecast for the eurozone in 2017 to 2.2 per cent, up from its previous estimate of 1.7 per cent.

This would be the single currency area’s fastest rate of growth since 2007.

Referring to the UK, the commission said: “Investment growth is forecast to weaken in 2018, as many firms are likely to continue deferring investments in the face of uncertainty.”

The commission added that its forecasts are based on a “purely technical assumption” that UK-EU trade will continue undisrupted after 2019. 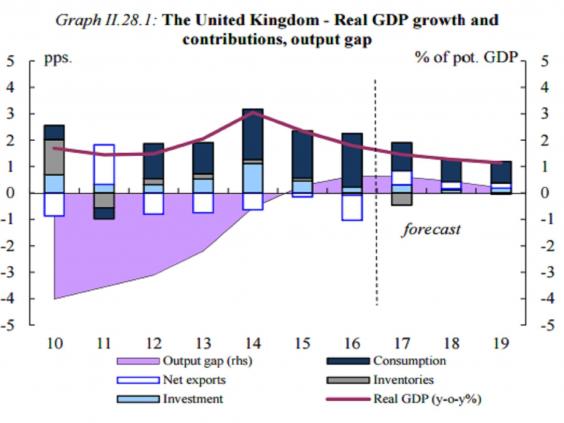 “This is for forecasting purposes only and has no bearing on the talks underway in the context of the Article 50 process,” it said.

The commission’s forecasts for the UK are close to those of the Organisation for Economic Cooperation and Development (OECD)’s, which forecast last month for UK GDP growth to be 1.6 per cent this year, before slumping to just 1 per cent in 2018.

However, the OECD’s projections are based on the assumption that the UK will leave the EU without a trade agreement.

The Bank of England’s latest UK GDP forecasts are considerably rosier than either the commission’s or the OECD’s.

It expects GDP growth this year and next of 1.6 per cent, climbing to 1.7 per cent in 2019. This is based on the assumption of a “smooth” Brexit.

The Treasury’s official forecaster, the Office for Budget Responsibility will publish its own projections alongside the Chancellor’s Budget on 22 November.

UK GDP growth picked up slightly to 0.4 per cent in the third quarter of 2017 according to the Office for National Statistics, having grown by just 0.3 per cent in the first two quarters of the year.

However, the year-on-year growth rate in third quarter was just 1.5 per cent, the lowest since 2013.

GDP growth since the Brexit vote has mainly been driven by household spending, which has come under pressure this year as rising inflation from the slump in sterling has squeezed real incomes.

The contribution of exports to growth has been disappointing, despite the boost to firms from the cheaper pound, and business investment has been relatively weak with many companies citing deep uncertainty over future trade relations with Europe.

The in-service Gripen C/D is set to play a major part in Swedish defense alongside...