The driver of a “high profile” Russian couple died outside exclusive members’ club Oswald’s, sparking fears of a similar attack to the Salisbury poisoning in March.

The black Mercedes that the man had driven did not have diplomatic plates, and was parked outside top jewellers Garrard and opposite Asprey.

An eyewitness said: “It was the driver of a Russian couple who were going into Oswald’s members bar.

A huge area, which includes the Royal Institution building, has been placed in lockdown in the busy West End area of the capital – close to the packed shopping hub New Bond Street.

Pictures show swarms of emergency service vehicles on Albemarle Steet, which has been cordoned off from Grafton Street to Stafford Street.

A helicopter was also pictured circulating the scene.

The Metropolitan Police said in a statement: “At approximately 15:15hrs on Thursday, 21 June, police responded to a call from the London Ambulance Service (LAS) relating to a man taken ill on Albemarle Street in Mayfair.

“Officers attended the scene. At the location they found a man being treated by the LAS. He was subsequently pronounced dead at the scene.

“Due to concerns the victim may have been exposed to a poison, specialist officers attended but found no evidence that would indicate the victim had been poisoned.

“There are no other reports of people being taken ill.

“Cordons were put in place around the area to allow the emergency services to carry out their work.”

London Ambulance Service has confirmed that they were called to the scene due to someone suffering a cardiac arrest.

A spokesperson said: “We were called at 3.14pm today to Albemarle Street, Mayfair, to reports of a person in cardiac arrest.

“We sent a number of resources to the scene with the first of our medics arriving in five minutes.

“Sadly, despite our efforts, a man died at the scene.”

The victim has not yet been identified.

People nearby took to social media to provide updates on the lockdown of the area.

Tom Tailby tweeted: “Albemarle street in Mayfair crawling with police and ambulances, something big for so many people surely?”

Albemarle Street was later reopened and those working on the street were allowed to leave. 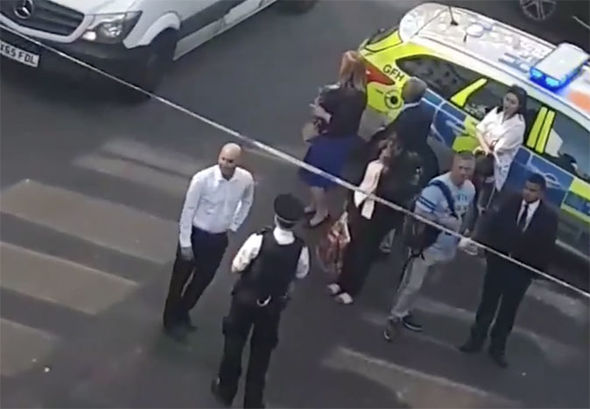 It is one of the capital’s most exclusive neighbourhoods, surrounded by foreign embaassies, including Argentina, Italy, Japan, Malta, Mexico, Myanmar, Panama, Saudi Arabia and Sudan.

It is also home to expensive jewellers and luxury car dealerships, while Albemarle Street houses designer brands including Paul Smith and Alexander Wang.

The UK has been on high alert after former Russian spy Sergei Skripal and his daughter Yulia were poisoned with the nerve agent Novichok in Salisbury in March.

The pair spent weeks in hospital fighting for their lives after being found slumped on a park bench in the town’s city centre.

They have both now left hospital and are recovering.