The UK is set to bask in humid conditions in the run up to the late August Bank Holiday – the last public holiday of the year.

The Met office said the country will return to more sweltering conditions, following a much needed week of cooler temperatures and rain.

The weather agency said Monday will begin with sunny spells in northern England and Scotland, while the centre of the country will see light rain with clouds forming over head.

UK weather forecast: Britain to be Blasted by Freeze as Snow hits

UK snow forecast: Is it going to snow this month ?

The Met Office confirmed that light winds will bring temperatures in the north of the country to 22C and 26C in the south.

Air left in the wake of post-tropical storm Ernesto’s will send temperatures to 28C (82.4F) by Wednesday.

But chilly winds will drip temperatures by around 10C across the country.

Exacta Weather’s James Madden said: “There will be a cooler and more unsettled couple of days later this week as winds come in from a more westerly direction. 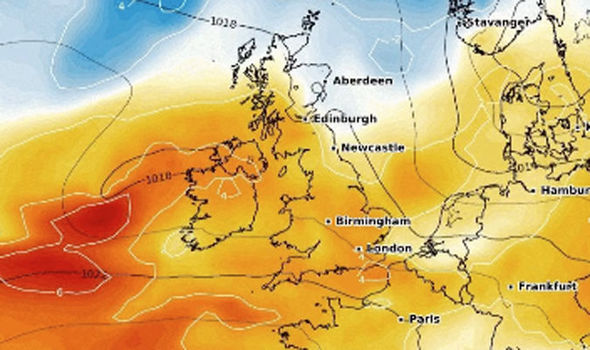 UK weather forecast: Temperatures will reach up to 28C this week (Image: WXCHARTS)

“There is also very high confidence that we could see another heatwave during the final few days of the month and into the start of autumn.”

“Any unsettled weather will be replaced by a more favourable pattern as we head into the bank holiday weekend.

“Higher temperatures and summery conditions are likely to dominate the last few days of summer.

“There is also very high confidence that we could see another heatwave during the final few days of the month and into the start of autumn.”

South-eastern England will hold onto the warmer weather until Thursday before the whole country takes on an autumnal feel.

The UK has only received half the normal rainfall over the past three months than it would in previous years, with around 110 percent of the usual levels of sunshine, according to Met Office figures. 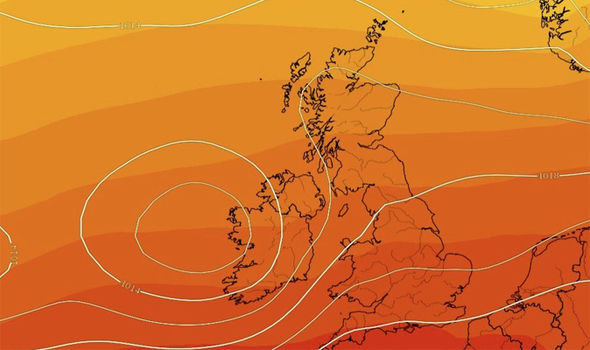 But forecasters say that summer 2018 will more than likely clock in the top five hottest sumers in the UK on record.

“On this measure it’s clear that the meteorological summer of 2018 is exceptional, simply for the consistent levels of warmth seen throughout the period so far.”

Government forecasters say the mercury will rise through the next few days as tropical air floods into Britain.

But Met Office meteorologist Aidan McGivern said there was “huge uncertainty” over how long it would last.

He said: “The big ridge in the jet stream could start to happen and if that happens then it will have big downstream consequences on the weather at home because this ridge will then ripple all the way across North America, the north Atlantic and then under close to the UK.

“If we end up on the south of this ridge we will have similar weather to what we had earlier in the summer – the heatwave, the dry, the heat, the high pressure.

“And we have still got this warm air hanging about across southern Britain.

Fellow Met Office meteorologist Craig Snell said: “The remnants of Ernesto have allowed the winds to switch to coming from a southwesterly direction so we will be importing tropical maritime air into the country.

“Monday is likely to be quite warm and humid with temperatures reaching 25C (77F) or 26C (78.8F) in southern Britain although there will be a good deal of cloud around.

“There will also be showers in parts of the country and we expect to see a similar picture on Wednesday although it could be warmer with temperatures reaching 28C (82.4F) in some parts.”

Londoners are also set for another 25C heatwave on Wednesday, which will feel fresher because of rain befoere cooling down to 20C on Friday.